Our Lady and the Holy Sacrifice of the Mass

The Holy Sacrifice of the Mass is essentially the sacrifice of the cross. But God willed that Mary should share in this sacrifice on Calvary. As Co-Redemptrix she offers to the Heavenly Father the same sacrifice as her Son, through her renunciation of her maternal rights to Him and through the union of her will and her sufferings with the will and the sufferings of Christ.

The Holy Mass is the bequest of the merits of the sacrifice of the cross. Mary, however, is the one who distributes all the graces merited on Calvary. Therefore, she has a special role at Holy Mass, in which this distribution takes place in an utterly pre-eminent way. On Calvary Mary gives birth to divine life in us. And this motherhood continues in every Holy Mass: the renewal and re-presentation of the sacrifice of the cross involves the renewal and re-presentation of her mediation of grace.

Therefore it is useful to participate in the celebration of Holy Mass as a kind of standing beneath the Cross with Mary, the Mother of Sorrows, as a way of entering spiritually into her sorrowful Heart, so as to penetrate with her and in her into the sentiments of our Crucified Lord.

For this reason, Mary often appears during the holy liturgy: in the Confiteor she helps us to experience deeper contrition and purity of heart. In the Credo we profess her decisive role in the mysteries of the Incarnation and Redemption. In the prayer Suscipe Sancta Trinitas at the end of the Offertory we understand the Holy Sacrifice of the Mass as the supreme act of her glorification. In the prayer Communicantes before the words of Consecration, we unite ourselves with her so as to unite ourselves entirely, in her, with Christ’s offering. After the Pater noster we ask for her intercession, so that the Queen of Peace may bring about in us the peace of Christ.

Yet the liturgical furnishings are a likeness of Mary, as the Ethiopian liturgy very clearly states when it praises Mary: “Rejoice, thou golden table, upon which the exquisite Mystery ripens. Thou art the golden bowl, in which the manna is kept, the bread that came down to us from heaven. Thou golden paten, which carries the showbread. Thou golden chalice, which contains the wine of the Mystery, mixed with the fragrance of the Holy Ghost… Thou art the golden censer that contains the burning coal of the divinity.”

In the same sense Fr. F. Faber writes: “The Heart of Mary is the living altar upon which the sacrifice is offered. This pierced Heart is also the server at the altar, whose heartbeat is the liturgical responses. It is the censer, in which the faith, hope, love and adoration of the whole world ascends like incense before the Lamb who was slain. It is the choir of this formidable Mass, surpassing all the angels. Was not the silence of Mary’s wondrous sufferings like the singing of secret, ineffable songs to the enraptured ear of the bloody Victim?”

Thus Mary is the spiritual space, the holy atmosphere, the sanctuary, in which we are transformed, so as to understand and penetrate ever more deeply into the great divine drama and to receive interiorly all the fruits of this tree of life. 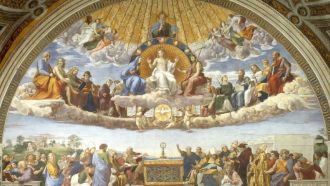