7. Reconstruction of the Third Secret

The information provided by these six different sources is sufficient for us to attempt to say what the Third Secret contains. In doing so, we must point out that what is of utmost importance is neither the formulation of the sentences nor the exact words that are employed. It is the contents of the secret that are most important, i.e. the following essential points:

“In Portugal, the dogma of the Faith will always be preserved …”. As the question of “Faith” is a new one in the whole message of Fatima, the following lines will develop this theme (Fr. Schweigl, all experts of Fatima, Fr. Fuentes, the writings of Sr. Lucia).

Sr. Lucia calls it “a terrible spiritual war”, a “diabolic disorientation will overflow the whole world”, provoking terrible fights and wars which lead “almost everybody to Hell” (Jacinta) by means of a general apostasy and loss of faith (Bishop do Amaral, Card. Ratzinger, Fr. Alonso).

From 1960 onwards, a diabolic orientation will overflow the world, and even inside the Church a terrible heresy will be established by its own hierarchy. If the year 1960 is so important for Sr. Lucia, and also important for the adversaries to discredit (1/ Lucia has invented the date; 2/ Lucia admits that it is so), then the events in that time must be a part of the Secret. There would otherwise be no reason to formulate such terrible lies about the origin of the 1960 date.

d) The second circumstance of the Secret is the description of the source of the crisis:

This source is the Pope and the Secret is a terrible message for him. All major requests have to be fulfilled by the Holy Father: the establishment in the whole Church of devotion to the Immaculate Heart, the consecration of Russia. For him especially we have to pray, the calamities announced will fall particularly on him!

e) The remedy to vanquish the calamity

The Holy Rosary which is, along with devotion to the Immaculate Heart, the last remedy given to the world.

f) The conclusion (already revealed) is the triumph of the Immaculate Heart of Mary.

If we put together these elements, the Secret (written on a little sheet of paper) can easily be reconstructed, if not in its exact words, at least in its essential contents: “In Portugal, the dogma of the faith will always be preserved” … as long as the requests of Our Lady are heeded. However, if the world keeps on ignoring the message of Fatima, from the 1960s onwards, a grave heresy will settle in the very heart of the Church — modernism — which will lead to apostasy in a large part of the world. A large number of clergymen, up to the very top, will lose the faith. A countless number of souls will be lost because of failure and serious neglect on the part of pastors, and especially of the Pope himself, who will push the Church towards destruction. The very same people whom the Holy Father had favoured for this enterprise of destruction will rise against him with the most terrible blasphemies and hatred while the small number of faithful left will die of spiritual hunger.

The last remedy to warn against this blindness and most terrible chastisement which sweeps away souls into Hell will be devotion to the Holy Rosary and to the Immaculate Heart of Mary. Therefore, Our Lady requests the Holy Father to accomplish solemn acts in this sense (maybe to establish the Holy Rosary as an official prayer of the Church and the feast of the Immaculate Heart of Mary as one of the main celebrations in the Church). If he refuses to fulfil Heaven’s demands, he will be himself chastised in the most terrible way and the forewarned chastisements will devastate the entire world. Whoever will stay faithful to Our Lady won't perish and she will never abandon them. “In the end, my Immaculate Heart will triumph.” 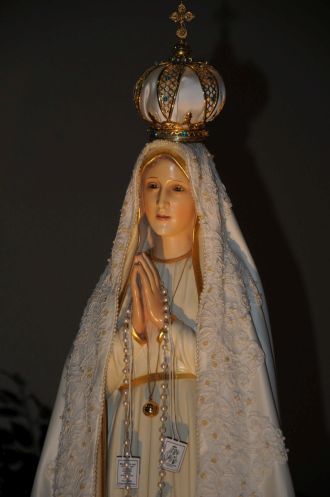